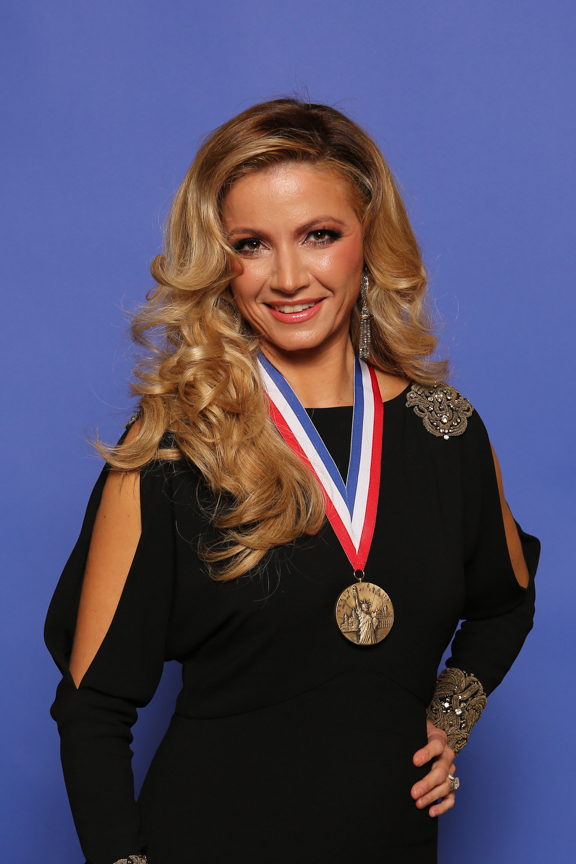 MARINA ARSENIJEVIC is an international award-winning pianist and composer,star of the Emmy-nominated Public Television program, Marina at West Point: Unity through Diversity which has been broadcast to more than 180 Million viewers with over 400 airings by PBS Stations all across the country. Marina created the program and performed with the 120 member joint ensemble of the West Point Band and West Point Cadet Glee Club. The Concert was recorded live at West Point's historic Eisenhower Hall and will continue to be broadcast all across the country through 2016.

Marina's Unity Through Diversity' concert blends patriotic themes with the rhythms and melodies of many cultures and religions represented in the United States. The concert has been described as a 'Symphonic Powerhouse of Patriotism and Passion'.

West Point honored Marina by inviting her to address the entire Corps of Cadets from the Poop Deck (which overlooks the Mess Hall with 4000 Cadets in session) where Generals MacArthur,Patton and Eisenhower gave their famous speeches. At the time, she was the fourth woman to be given that honor after Margaret Thatcher, Madeleine Albright and Hillary Clinton. Following the West Point concert, Marina became a citizen of the United States.

Marina, born and raised in Serbia, has a superstar reputation in her homeland as well as in Europe. She has focused on transforming different musical genres and styles by seamlessly blending diverse cultural and ethnic rhythms with traditional classical themes and techniques. Her music has been described as 'unique to the ears yet familiar to the soul.' Marina became enamored with the piano at the age of 4 when she first saw one being played by the accompanist in her ballet class. She then relentlessly started collecting miniature pianos of all types and sizes. After her collection grew to over 100,she finally convinced her beleaguered parents to buy her a real piano at the age of 6. The piano immediately took charge of Marina's life and she was permanently captivated by the instrument. She was perfectly content to practice all day long, to the relief of her parents.

She was only 9 years old when she made her debut solo concert in Belgrade in front of an audience of 2000, performing compositions by Chopin, Beethoven and Brahms. She studied with some of the world's great piano masters from Yugoslavia, Austria, Hungary, Italy, Germany and Russia including Professors Tamas Vasary, Konstantin Bogino and Nevena Popovic. Marina developed a powerful piano technique by elevating her body off the piano bench and transferring the strength this generated into her arms. Marina's legendary finger strength gave her an advantage in both power and speed normally reserved for large handed male pianists, enabling her to dominate the piano competitions in Yugoslavia for many years. She went on to win six international piano competitions in Italy, Yugoslavia and Macedonia. She performed with every major orchestra in Eastern and Central Europe.

She completed her formal music studies in piano and composition and received her Master's degree with honors from the University of Arts in Belgrade at the age of 21. Marina's recordings of 'Mozart: Marina and the St. Petersburg Soloists' and 'Chopin Piano Waltzes' became top-selling classical CDs in Central and Eastern Europe.

The disintegration of Yugoslavia into conflict among its diverse ethnic groups greatly affected Marina's outlook on life and her music. She craved peace and unity in the face of ethnic extremism. As a result, she developed her hallmark 'Unity In The Face of Diversity' and immediately applied her vision of unity and hope to her musical compositions, creating a new style of the ethno-classical genre. Marina described the process as follows: 'Whenever I blend diverse cultural melodies with varied ethnic rhythms,regardless of their conflicted history, the music always reveals our common humanity.'

The public quickly recognized the uplifting spirit in her music,and Marina's popularity soared with sold-out concerts throughout Eastern and Central Europe. She toured with her transparent plexi-glass grand piano, made for her by Herr Schimmel of the Schimmel Pianoworks in Germany. Her album, My Balkan Soul, became the best-selling classical crossover CD in 11 European countries. Marina's CDs have sold over one million copies world-wide. She was featured on 40 magazine covers and hundreds of television programs in Europe. She received the Yugoslav 'Oscar' for most popular musical artist in 1996. The following year,she received the Yugoslav Media Award for Most Popular All Media Personality. Yugoslavia's most popular TV Magazine explained Marina's unique appeal as follows:

God gave her the look of a model, the talent of an exquisite artist, and the flawless political skill of a chess master. She has an ability to communicate with diverse peoples and nations, which even great diplomats would envy.

As the conflicts in Yugoslavia expanded into all-out war, Marina witnessed firsthand the suffering caused by ethnic strife. She was hopeful that music would remind the Yugoslav people of their common heritage. During the height of the civil wars and ignoring extensive political pressure, Marina challenged the intolerance and took the Serbian Radio and Television Symphony Orchestra to Kosovo's largest hall, the 11,000 seat Boro Ramiz Center in Prishtina, where she played both Muslim and Christian music to an appreciative standing room audience of Muslims and Christians without a single incident of violence. As a result of this courageous act, however, she was barred from appearing on television by political extremists. She responded by performing over 75 concerts before large crowds in shopping centers, music halls and hotels with her original music, seamlessly blending ethnic and cultural rhythms with Muslim and Christian melodies.

On the last day of bombing in June 1999, Marina introduced her new composition 'Kosovo' at the National Museum in Belgrade. As she played the deeply interwoven Christian and Muslim melodies of Kosovo' with tears flowing down her face,she noticed that the audience also began to weep as everyone in the concert hall realized that Yugoslavia, as a united multi-cultural nation, was no more.

The next day Marina was advised to leave the country immediately for her own safety. She was guided to the US Embassy in Budapest where by special bipartisan Congressional arrangement she was able to enter the United States. Following the ouster of extremists, Marina was invited by the newly formed moderate government to return to Serbia for a European concert tour and over 300,000 fans came to hear the music that helped calm a nation torn apart by hatred and violence.

Following the tragedy of 9/11, Marina felt compelled to return to the United States to perform a series of benefit concerts for the victims and their families in Pennsylvania and Maryland and to thank the American people for their generosity in granting asylum in the United States to refugees in mixed Serbian-Muslim marriages who had fled persecution in Bosnia.

In America, critics have described Marina as a 'James Bond' beauty with a powerhouse technique that delivers an emotional punch like a Balkan thunderbolt, while her compositions have been described as breathtakingly original and captivating the soul. Marina has performed to enthusiastic audiences and standing ovations at major venues such as Carnegie Hall (two separate sold-out appearances), the Chicago Symphony Center, the Toronto Center for the Arts, the Chicago Navy Pier Auditorium, and many others throughout the country. Laura Bush and Cherie Blair (wife of the British Prime Minister) along with 2000 other guests were dazzled when Marina played her original arrangement of America, the Beautiful at the annual First Lady's Luncheon in Washington D.C. in 2003.

Marina also undertook a multi-city concert tour in the United States and Canada to raise awareness and humanitarian aid for orphans and needy children throughout Eastern Europe by assisting charities such as the Serbian Lifeline Humanitarian Organization and the Russian Children's Welfare Society. Her concerts have also raised funds for seriously ill children in the United States through the Michigan's Rainbow Connection.

Marina is the 2011 recipient of the Leaders of Conscience Award by the Sacred Heart Academies in the United States, which recognized her courage and work in uniting diverse cultures amid the conflict, ethnic strife and violence that once embroiled the Balkans. Marina is also the recipient of the 2014 Tesla Science Foundation Future Icon Award following her performance of her original composition Tesla's Journey at the 2013 dedication of a Nikola Tesla statue at the century-old Tesla Wardenclyffe Laboratory in Long Island. The statue was
donated by the Government of Serbia.

Marina was selected as a recipient of the prestigious Ellis Island Medal of Honor in 2014. She was honored for her outstanding achievements and humanitarian efforts in building bridges among diverse cultures and nations through her music.

Marina is currently composing music for theatre, film and concert stage commemorating the life of her countryman, the renowned scientist Nikola Tesla. Her Tesla Rhapsody will debut in 2015 by orchestras throughout the United States and Europe. Marina is also busy preparing her Unity Through Diversity Symphony Pops concert series.